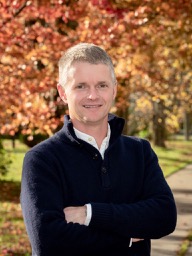 Jim grew up in the town of Springfield, Vermont. He received a BA in Psychology from Johnson State College.  After school, he spent 12 years working in multiple managerial positions at Smugglers’ Notch Resort, which he credits with his “Jack of all Trades” skill set.  He went on to become Operations Director at ReSOURCE: A Non-Profit Community Enterprise, starting a new reuse and training facility in Lamoille County. He also developed many improvements and efficiencies to their reuse operations in Chittenden and Caledonia Counties.  The 5 years spent with ReSOURCE is where he got the bug for non-profit work.  He joined the United Way of Lamoille County because of the programs they deliver to Lamoille County, such as New Foundations and the Firewood Project.  He enjoys talking to people, and meeting them where they are.

In his free time, you may find him at the mountain teaching his three kids how to ski, enjoying a burger with his family, or working on his house. Jim currently serves on the board of directors of the Lamoille County Chamber of Commerce, and as Board President of the United Ways of Vermont.

Jim lives in the Village of Hyde Park with his wife, 3 kids, and 10 year old golden retriever who still acts like a puppy. 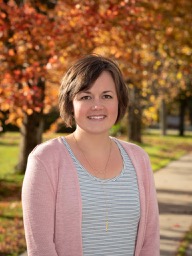 Clarissa is an experienced task juggler and DIY’er. She thrives in an environment where she can be super organized and creative at the same time. As the Campaign and Marketing Coordinator, she is responsible for building relationships with community members through our website, social media and events. Clarissa received her Bachelor’s in Social Work from the University of Vermont in 2009. She has worked for various non-profit organizations and spent several years as a full-time stay-at-home parent. She is passionate about giving others what they need to reach their potential and feels that working for United Way gives her the best opportunity to do that.

In her free time, she enjoys time with her family and friends, gardening, hiking and the occasional (or frequent) Netflix binge. A native Texan, Clarissa appreciates a good brisket taco and a big glass of sweet tea.

Clarissa lives in Jeffersonville with her husband, two kids, two dogs, a cat, and a fish. 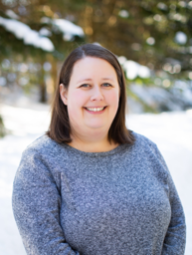 Savannah grew up in Idaho and has lived in Maryland, Tennessee, Washington, and Massachusetts until finally realizing Vermont was home in 2014. She received a B.A. in Sociology from University of Maryland Baltimore County and a Master of Public Health degree from Boston University.

Savannah has held various human service roles in the areas of domestic violence, restorative justice, and creating healthy communities through sidewalks, bike lanes, parks, access to food, and community gardens. All of her work has been centered on supporting people and communities in their journeys.

As the New Foundations Program Manager, Savannah supports single parents during their two year stay with us while they work towards independent living and self-sufficiency.

Outside of work she enjoys spending time with her dogs, reading memoirs, gardening, and collecting lots of house plants.